The Vicar Of Dibley actor Trevor Peacock has died at the age of 89, his family have confirmed.

The actor, who played Jim Trott in the comedy series, suffered from dementia in later life.

The degenerative condition contributed to his death on Sunday morning, with his family confirming he passed away fom a ‘dementia-related illness’.

Peacock first appeared opposite Dawn French in the BBC sitcom in its debut episode in 1994 and continued to appear in every episode of the Richard Curtis show until 2015.

The actor, who is survived by his four children, won over fans with his saucy innuendos and his catchphrase of ‘no no no no…’ before everything he says.

His co-star Ms French led the tributes to the actor, saying: ‘Night Trev. I love you.’

He is survived by his wife, actress Tilly Tremayne, and their two children, as well as a son and daughter from his first marriage. 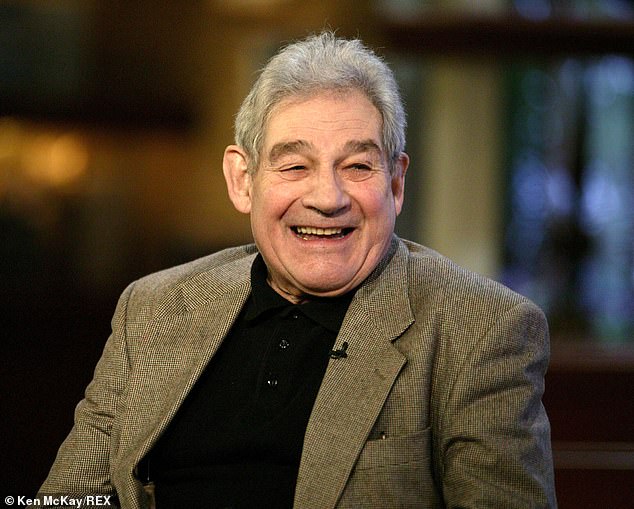 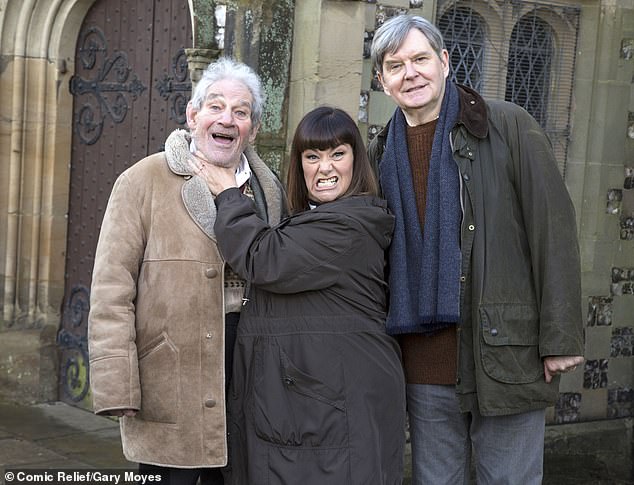 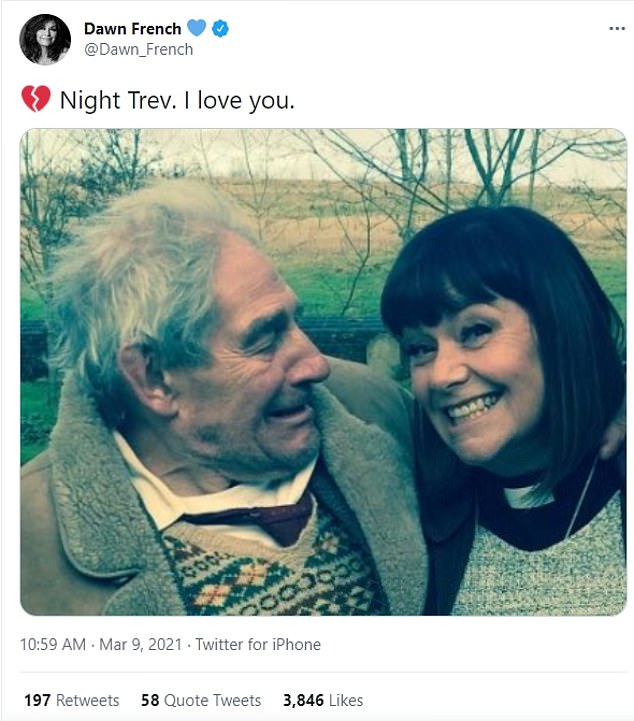 A statement on behalf of his family said: ‘Trevor Peacock, actor, writer and song-writer, died aged 89 on the morning of March 8th from a dementia-related illness.’

Tributes began flooding in for the actor after his agent confirmed announced the news of his death.

Paying tribute, his agents Scott Marshall Partners said on Twitter: ‘Remembering our wonderful client Trevor Peacock who died peacefully yesterday. A comic genius and one of the very best humans. We will miss him hugely.’ 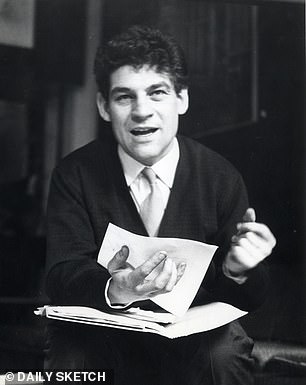 The actor suffered from dementia in the later years of his life, which his family say contributed to his death

Actor George Rainsford wrote on Twitter: ‘Ah man I loved Trevor Peacock. Remember him as Giles Corey in the @TheRSC’s #TheCrucible and scene-stealing with his line, ‘A fart on Thomas Putnam!’

‘Achieving both pathos and comedy in so few words. #RIPTrevorPeacock’.

TV channel Gold also tweeted: ‘We are all saddened to learn that Trevor Peacock, who played Jim Trott so brilliantly in The Vicar of Dibley has passed away at the age of 89. Our thoughts are with his family and friends.’

A tweet from the BBC Press Office said, alongside a picture of the actor: ‘We’re saddened to hear of the death of actor Trevor Peacock.’

Fans also responded to the sad news of his death with many taking to social media to exclaim ‘No! No, no, no’ at his passing.

One social media user called the actor ‘comedy gold’ while another paid tribute to ‘one of the funniest character actors ever.’

Peacock appeared as the gruff character Jim, a much-loved member of the Dibley Parish Council, opposite the show’s star Dawn French in 26 of the show’s episodes.

The show originally aired from 1994 to 1998, but the series returned for various specials before officially concluding in 2007. 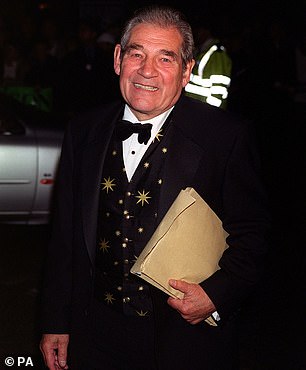 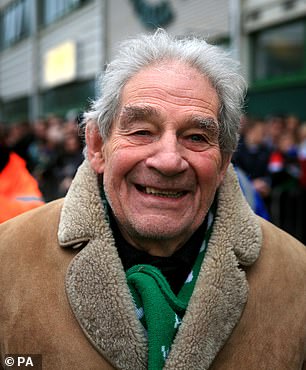 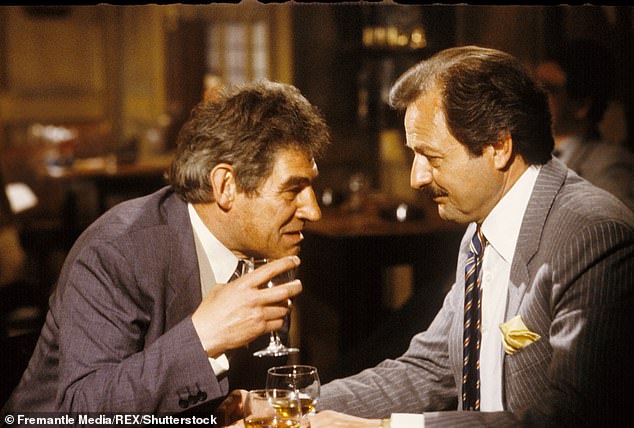 Peacock’s career has spanned acting on stage, film, radio and TV and songwriting 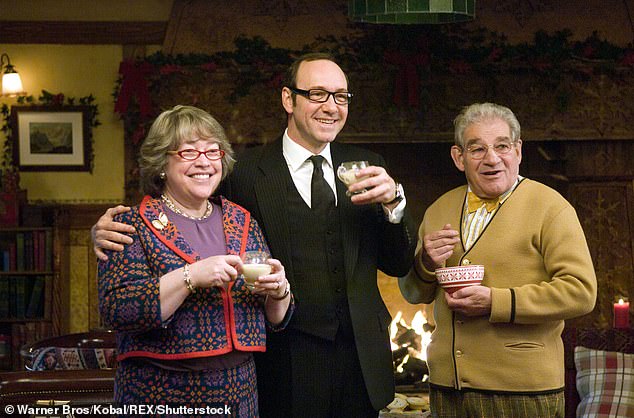 In 2007 he appeared in the Hollywood film Fred Claus playing the father of Father Christmas. Pictured: With Kathy Bates and Kevin Spacey

It briefly headed back to screens for various shorts in aid of Comic Relief with Peacock’s last appearance on screen in the 2015 special.

Peacock was absent from the show’s Christmas revival in December 2020. 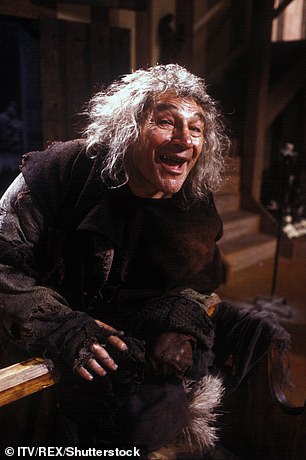 He was also an accomplished stage actor as well as appering on TV and in film. Pictured: Peacock as Matthew Skips in ‘The Lady’s Not For Burning’

His family shared details of his Alzheimer’s diagnosis four years ago, saying that he no longer remembered appearing in the much-loved show.

He also had no recollection of his acclaimed acting career, which spanned 50 years, and was baffled when he was recognised by fans.

His daughter Sally said at the time: ‘As a character actor, he has made so many people laugh for such a long time.

‘Sadly, now he doesn’t understand why people want to come up to him to talk to him or thank him for his work.’

He started experiencing health problems in 2003 when he had a mini-stroke while performing at the Exchange Theatre, Manchester.

In 2009, he was diagnosed with vascular dementia – the death of brain cells brought on by a stroke – and in 2013 he was told he had Alzheimer’s disease, in which abnormal proteins cause brain cells to die, leading to gradual mental decline.

He passed away on Sunday morning as a result of a ‘dementia-related illness’, although his family did not go into further detail about the condition.

Prior to his death, his family campaigned to raise awareness of the condition.

They created tree-shaped mobiles made from sticks from his Somerset garden known as ‘Trevor Trees’ and sold them in aid of the Alzheimer’s Society.

Peacock married twice and was dad to two sons and two daughters. He divorced his first partner, Iris Jones, while his second wife, actress Tilly Tremayne, was able to help him through his poor health in later years.

The actor, who is survived by at least six grandchildren and one great grandchild, is understood to have spent some of the final years of his life in a nursing home in Yeovil, Somerset.

Many fans used Jim Trott’s catchphrase to mourn his loss, posting ‘no, no, no’ at the sad news

Suggesting entertainment for a Gala Night, Jim said: ‘No, no, no, no, yes! I saw this movie the other day: the Full Monty.

‘So you just get some music, and I’ll take all my clothes off. You’d certainly get your money’s worth. I’ll take my truss off and everything.’

Peacock is the latest Vicar of Dibley cast member to pass away in recent years.

Emma Chambers, who played Alice Tinker in the BBC comedy series for 13 years, died of natural causes, thought to be a heart attack in February 2018.

Peacock’s career has spanned acting on stage, film, radio and TV and songwriting.

Born in Edmonton, north London, in 1931 and started his TV career in the 1960s in the ITV Television Playhouse, Comedy Playhouse and The Wednesday Play.

He later played Rouault in Madame Bovary and Quilp in The Old Curiosity Shop and made appearances in EastEnders, Jonathan Creek and sitcom My Family.

In 2007 he appeared in the Hollywood film Fred Claus, opposite Vince Vaughn and Paul Giamatti, playing the father of Father Christmas. 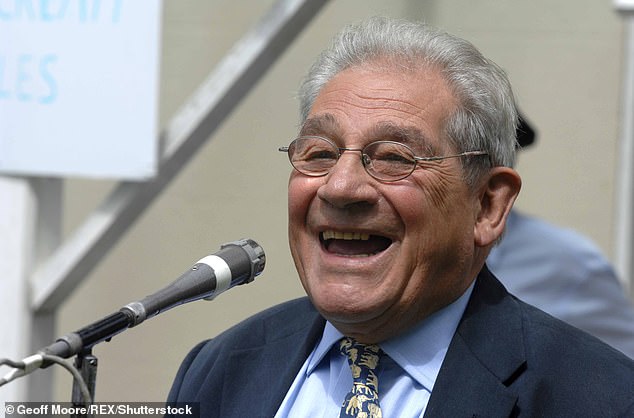 Peacock started experiencing health problems in 2003 when he had a mini-stroke while performing in Hobson’s Choice at the Exchange Theatre, Manchester

Peacock was also an accomplished songwriter and wrote a number of hit songs including the 1960s track Mrs Brown, You’ve Got a Lovely Daughter, which was recorded by Herman’s Hermits and Mystery Girl, recorded by Jess Conrad, as well as the lyrics for a number of hits by The Vernons Girls.

He was also an accomplished Shakesperean actor, starring in a number off BBC productions including Titus Andronicus, Twelfth Night and Henry V.

He had a long relationship with the Royal Exchange theatre in Manchester and performed in many productions there, as well as writing a number of musicals, including Leaping Ginger, Cinderella, Class K and Jack And The Giant.

After separating from his first wife, Peacock married actress Tilly Tremayne, famous for her role on Coronation Street as Dr Marian Taylor.

Of Peacock’s four children, his two sons from separate marriages, Daniel and Harry, also followed him into acting.

The former is now a writer and director and previously appeared in Only Fools and Horses as ‘Mental Mickey’ and as parts in films including Robin Hood: Prince of Thieves and The Jewel of the Nile.

Peacock’s son Harry also starred as Ray Purchase in Toast of London and was cast as parts in episodes of Doctor Who and Midsomer Murders, both in 2008.

More recently he has appeared in Porridge and The Windsors comedy series. Harry is married to married to actress Katherine Parkinson, star of The IT Crowd.

Peacock’s daughter Maudie, from his second marriage, also works for the BBC.

Vicar of Dibley cast: Where are they now? 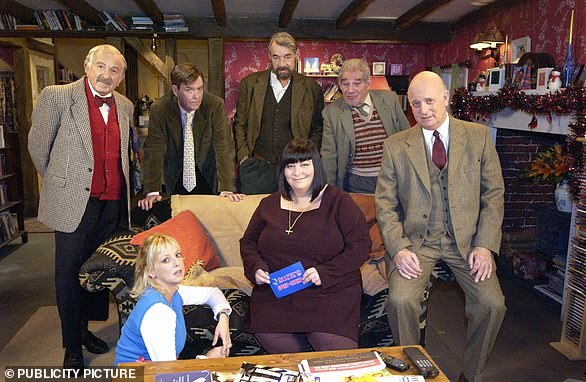 Since playing the Vicar of Dibley Geraldine Granger for decades, Dawn has had a number of other acting roles such as starring alongside Emilia Fox in Delicious.

She also reprised her role for a Vicar of Dibley Christmas special in 2020 which saw her charcter react to current affairs including lockdown and the Black Lives Matter movement.

Having played Hugo Horton in the BBC comedy series, Fleet has continued acting on the screen.

Famed for his role in Four Weddings and a Funeral, Fleet also played Robbie Sloane in Coronation Street and starred in the third series of The Unforgotten in 2018.

Although he was an accomplished Shakespearean actor prior to appearing on the show, after it ended Waldhorn retired and remained off screen since.

The Vicar of Dibley came to an end when Chamber’s character Alice Tinker became Mrs Horton.

The actress starred in a number of films after the show ended, including credits in Richard Curtis’ Notting Hill.

Sadly the actress, who appeared in the Vicar of Dibley for 13 years, died of natural causes, thought to be a heart attack in February 2018.

His character famer Owen Newitt was known for his rough mouth on the BBC show.

Lloyd-Pack was also known as another rough and ready character – Trigger in Only Fools And Horses in the 80s and 90s. He also starred in Harry Potter and the Goblet of Fire.

The actor passed away in January 2014 of pancreatic cancer aged 69.

Bluthal died aged 89 in November 2018 after playing the much-loved Frank Pickle, Bluthal in the comedy between 1994 and 2007.

Starring as Letitia Cropley in the BBC series, Smith’s character was famed for her terrible cooking.

Her career also included roles in A Queen’s Nose and A Private Function, for which she won a BAFTA.